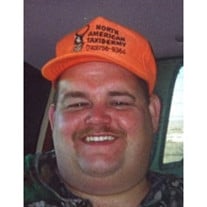 Brian Keith "Pudgy" Taylor was born October 2, 1969 to Donald and Priscilla Taylor, passed away October 10, 2017. He attended Nitro Elementary thru High School, having graduated Class of 1988. Pudgy was a born again Christian, loved to profess his love for the Lord, sang in church, preached and was a role model for many. He was always lending a helping hand and bringing lost souls to the Lord. He was an avid West Virginia Fan, loved to hunt, fish, racing go-karts and was a wonderful cook. Special mention to his racing friend, J.R. Sisson. His pride and joy was his son Isaac which he lived and breathed for, and loved with all his heart. He was preceded in death by brothers, Ashley and Martie Taylor; grandparents, Othella and Creed McClanahan; uncle, Hank McClanahan; aunt, Gail McClanahan, grandparents, Opie and Mary Taylor; uncles, Fred, John and Joe Taylor and his cousin Ryan Taylor. Survivors include his beloved son, Isaac; parents, Donald and Priscilla Taylor and Isaac's mother, Kim Taylor. Funeral Services will be 2:00 PM Sunday October 15, 2017 at Cunningham-Parker-Johnson Funeral Home with Pastor David Taylor and Pastor Paul Bailey officiating. Burial will follow in J.O. Taylor Memorial Cemetery, Sissonville. Visitation with the family will be two hour prior to services. The family will accept online condolences at: cpjfuneralhome.com Cunningham-Parker-Johnson Funeral Home is serving the Taylor Family.

The family of Brian Keith "Pudgy" Taylor created this Life Tributes page to make it easy to share your memories.

Send flowers to the Taylor family.