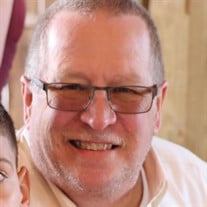 Cecil Grant Saddoris II, 63, of Sissonville, WV, passed away March 2, 2021. Born December 15, 1957 in Charleston, he was the son of Shirley Morris Hughes and the late Cecil Grant Saddoris. Cecil graduated from Stonewall Jackson High School, class of 1976. He worked for IATSE local 271 for 36 years and also worked for Verizon for 31 years until his retirement. Cecil coached for the Charleston Western Little League from 1974 until 2000, where he was a mentor to hundreds of boys. Cecil was frequently seen around town with his two St. Bernard dogs and was a friend to everyone he met. In addition to his father, he was preceded in death by his sister, Kathy Comer and niece, Rachel Saddoris. He is survived by his wife, Robin Saddoris; sons, Cecil Grant (Starr) Saddoris III, Chase (Andrea) Board and Cory (Ashley) Saddoris; brother, Darrell “Art” Saddoris; grandchildren, Wyatt Cooper, Austin Board, Karlee Strickland, Kylee Saddoris; his fur babies, Sebastian and Sammy, and numerous nieces and nephews. The family would like to thank the surgeons and medical staff at CAMC for their excellent care of Cecil. A Graveside service will be held at 2:00 P.M. on Tuesday, March 9, 2021 at Floral Hills Garden of Memories in Pocatalico. Cunningham-Parker & Johnson Funeral Home is assisting the family. In lieu of flowers, memorial contributions may be made in Cecil’s honor to Capitol Midwestern Little League, P.O. Box 6531, Charleston, WV 25362. Condolences may be expressed to the family at www.cpjfuneralhome.com

The family of Cecil Grant Saddoris II created this Life Tributes page to make it easy to share your memories.

Send flowers to the Saddoris family.