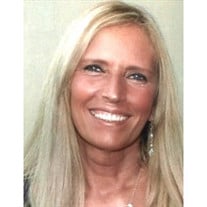 Denise Gail Thaxton Tate Denise Gail Thaxton Tate, 60 of Charleston, passed away, March 2, 2017, after a short illness. She worked for Prestera, formally Shawnee Hills for 20 years, was a lifelong resident of Kanawha County and a member of Sissonville Community Church. Preceding her in death were her brother, Herman Thaxton and sister, Nancy Thaxton. Surviving are; her husband, Johnny Tate of Charleston; sons, John Tate, Jr. of Charleston, and Jeremy Tate of San Francisco, CA; grandchildren, Jamison Frazier, Garrett and Madison Blankenship, and Brody and Callie Tate; brothers, Ronnie Thaxton, Leroy Thaxton and Clifton Thaxton; sisters, Debbie Thaxton Walker, and Terry Thaxton Burford. Neacy Gail was a wonderful person, loved by so many, and will be greatly missed. She loved Jesus and her church. She was the strength and backbone of her family. Heaven is gaining a beautiful angel. Funeral Services will be 2 p.m., Monday, March 6, at Cunningham-Parker-Johnson Funeral Home, Charleston with her brother, Clifton Thaxton officiating. Burial will be in Sissonville Memorial Gardens, Grapevine Road, Sissonville. Visitation with the family will be 6 to 8 p.m., Sunday, March 5, also at the funeral home. "Peace I leave with you; my peace I give you. I do not give to you as the world gives. Do not let your hearts be troubled and do not be afraid." John 14:27

The family of Denise Gail Tate created this Life Tributes page to make it easy to share your memories.

Send flowers to the Tate family.