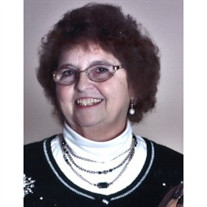 Doris A. Lanier McClanahan Doris A. Lanier McClanahan, 74, of Charleston, passed away at CAMC General Division on March 14, 2017. She was born on May 1, 1942 to Denver Paul and Gursha Monetia Older Lanier, who preceded her in death. She was also preceded in death by her husband, Donald Ray McClanahan, and Sister Loretta Lanier. Surviving are her children, Mark and his wife Sonya McClanahan of Haslet, TX, Shawna and her husband Bruce McClanahan of Poca, who Doris always referred to as her favorite son-in-law; grandchildren who were the apple of her eye, Christopher J. Moore and wife Erin of San Antonio, TX, Kendall McClanahan and Doris's future son-in-law, Matthew Purdy, both of Morgantown, Breann and Hunter McClanahan of Haslet, TX; brothers and their wives, Roy and Linda Lanier, Paul and Roberta Lanier, Ronnie and Belle Lanier; also surviving are her nieces, nephews, cousins, church family, and wonderful friends. The family would like to give special thanks to Anita Priestley, Laura "Tootie" Elliott and her little helper, Sara Elliott for the extra time and assistance they gave to Doris in her time of need. The family would also like to thank the staff at CAMC General Division for the care and compassion they gave our mother during her final hospital stay. Doris faithfully attended, led the music, sang in the choir, and cooked for Kelly's Creek Community Church for many years, up until the time her health started to fail. She had worked for Lowman's Drug Store on Charleston's West Side for many years, and retired from CAMC Memorial Division's Inpatient Pharmacy. Visitation with the family will be from 2 to 4 p.m. Saturday, March 25, 2017 at Cunningham-Parker-Johnson Funeral Home, Charleston. Funeral service will be 4 p.m., Saturday, March 25, 2017 at Cunningham-Parker-Johnson Funeral Home, Charleston with the Rev. Paul Bailey officiating. Private family burial will be held at Older Cemetery, Charleston.

The family of Doris A. Lanier McClanahan created this Life Tributes page to make it easy to share your memories.

Send flowers to the McClanahan family.