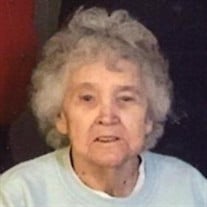 Dorothy “Dot” Atkins, 87, of Charleston, WV, passed away on September 6, 2020. Born November 26, 1932 in Charleston, she was a daughter of the late Howard and Anna Parsons Ashworth. In addition to her parents she was preceded in death by her husband, John Henry Atkins; son, William Henry Atkins; sister, Louise Utt; brothers, Clifford Ashworth, Howard Ashworth Jr., and Franklin Ashworth. Dorothy was a member of Nitro Nazarene Church. She is survived by her sons, Rusty (Virginia) Atkins of Bancroft, WV, Roger (Debbie) Atkins of York, SC, Gary (Connie) Atkins of Sissonville, WV and Dale Atkins of Parkersburg, WV; 7 grandchildren; 13 great-grandchildren and 3 great-great grandchildren. The family would like to send a special thank you to Hospice, and her caregiver, Dawn Casto. A Graveside Service will be held at 1:00 P.M. On Friday, September 11, 2020 at Tyler Mountain Memory Gardens in Cross Lanes, with Pastor Bron Walker, officiating. Cunningham-Parker-Johnson Funeral Home in Charleston is in charge of arrangements. Condolences may be expressed to the family at www.cpjfuneralhome.com

The family of Dorothy "Dot" Atkins created this Life Tributes page to make it easy to share your memories.

Dorothy “Dot” Atkins, 87, of Charleston, WV, passed away on September...

Send flowers to the Atkins family.