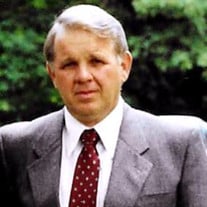 Edward Arthur (Eddie) Tackett was born March 17, 1942, in Charleston, WV to Charles Luther Tackett and Arminta Elizabeth Eary Tackett. Most people say his name should be Patrick but Arminta “wanted a little boy called Eddie.” Eddie passed on Tuesday, January 25 at CAMC Memorial Hospital from the auto-immune disease, microscopic polyangiitis, which attacked his lungs. Eddie was born on Kanawha Two Mile Edens Fork and spent his days with his brothers and friends climbing hills, riding bicycles, and playing touch football and pickup basketball games. He attended Atkinson and Bonham grade schools, and then went in town to Wilson Junior High School and Stonewall High School (the greatest school with the greatest sports teams.) After graduation he set out to work and earn his way in life. He began as a truck driver, and went on to use the skills he learned in school to be a steel fabricator working at the Stamping Plant in South Charleston, Trojan Steel and Parco Steel. Then he moved on to Monsanto Chemical where he retired in 2004. Eddie lived a life of service. He led the boys of the Sissonville area as a Scout leader in Troop 133, and as coach of T-ball, Minor League and Little League baseball teams. He won championships and coached all-star teams. The boys were eager to play for “Ed” because he knew how to help them be winners. Eddie found joy serving his brothers and sisters through many callings in the Church of Jesus Christ of Latter-day Saints Church, Charleston Second Ward. Another rewarding service for Eddie was preparing boxes of food at the Aldersgate Food Pantry for those in the community who needed help. Eddie understood the importance of each act of service we are blessed to give in this life. “Faith without works is dead.” But Eddie’s real passion in life was just another way to serve. It was not work to him. Gardening was satisfaction and reward and fulfillment. Every spring, summer and fall was spent sowing, planting, tending and harvesting the bounteous rewards of his faith and industry. If you knew Eddie Tackett, you were at some time gifted with juicy tomatoes, sweet corn, huge potatoes, crispy watery melons, a jack-o-lantern pumpkin, luscious berries, earthy beets, . . . . . . . . . . . . . It has been said, “A lovingly tended garden reflects a well-lived life.” In addition to his parents, Eddie is predeceased by a sister-in-law, Linda, wife of his brother, Lee, He is survived by his sweetheart wife, Judy Lanham Tackett, whom he met at Shoneys’ Drive-in Restaurant in May of 1964. They married two years later and brought forth 4 children: Jason Edward of Tremonton, Utah and his wife Margo; Sariah AMY Thomas of St. Albans; Matthew Colin of Frogs Creek; and Nathan Anthony of LaHonda, California. The grand children are Colton, his wife Bradee, Emma, Porter and Colin Tackett of Utah; and Christopher and Grace Thomas of Charleston. He is also survived by his brothers and sister: Delores Fisher and husband Phillip Fisher, Lee Tackett, Gene Tackett and wif Diana, and Jerry Tackett and wife Teloa. A visitation with the family is scheduled on Sunday, January 30, at Cunningham, Parker Funeral Home from 6 to 8 pm. The funeral service will be 11:00 AM Monday, January 31 at the Church of Jesus Christ of latter-day Saints on Route 21 beside Flinn Elementary in Pocatalico. You may also visit 45 minutes before the service at the church. Burial will follow in Floral Hills Garden of Memories, Pocatalico. Please wear masks to protect from illness.

The family of Edward Arthur (Eddie) Tackett created this Life Tributes page to make it easy to share your memories.

Send flowers to the Tackett family.