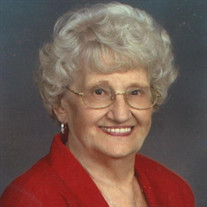 Eunice Cleo Abbott, 98, of Sissonville, WV, went home to be with the Lord on December 21, 2020. Born on October 31, 1922 at home in Allens Fork, Sissonville, WV, she was a daughter of the late Claude “Ott” and Mollie Bumgardner Slater. In addition to her parents she was preceded in death by her husband, Carl C. Talbert; husband, Richard J. Abbott; sister, Garnet Basham; brothers, John Slater and Guy Slater. Left to cherish her memory are her sons, Derrell Talbert of Sissonville, Bill (Renea) Abbott of New Smyrna Beach, FL and Robert (Olive) Abbott of Kenna; daughters, Joyce (David) Abbott Ashby of Cross Lanes, Wanda (Rondis) Abbott Cavender of Ripley, Denise Abbott of Kenna and Anita (Jimmie) Abbott Whittington of Sissonville; 8 grandchildren; 14 great-grandchildren; 1 great-great-grandchild; 9 step-grandchildren; 16 step great-grandchildren and 3 step great-great grandchildren. Cleo was a founding member of Aldersgate Methodist Church. While raising seven children, she was always active in the community, serving as a member of PTA’s, sometimes at the elementary, middle and high school, all at the same time. She was also a member of the Sissonville Garden Club, Sissonville Women’s Club, President of Senior Citizens of Sissonville and Senior Citizen Silver Hair Legislature. She was a member of the Sissonville Historical Society. She worked at Barbara’s Fabric Shop for a few years and then worked for Levin’s on Sissonville Drive for several years where she and co-workers Josephine Smith and Ruby Carney became great friends. They loved the people that shopped there. In addition, she worked election polls for many years. She carpooled for her children’s friends by taking them to football and basketball games at SHS. All our friends have stories about being in mother’s car. Cleo lived life to the fullest by staying on the move. If someone had wheels and were leaving, she was grabbing her purse to go. Daddy always said "she had her skates on". She had a magnetic energy that drew people to her. In her later years, her light shined brightly and her sharp mind never wandered. She was an accomplished seamstress and loved sewing and making clothing for her children when they were young and also enjoyed quilting. She was an exceptional cook and will be remembered for having family dinner on the table at 5:00 every evening, usually with two pans of her wonderful cornbread and a pie or two. In the summer she may be up at 5:00 in the morning preparing a picnic lunch to take with her and the children for a relaxing day at the Dupont Hunting and Fishing Club. After taking a cake decorating class, she made many beautiful wedding and birthday cakes through the years. Even after her cooking days, she would still insist on tasting the dressing at family gatherings to make certain it was just right. She loved sports and attending high school sporting events and was enthusiastic in support of the Sissonville teams and you did not want to sit too close to her when she would get excited and start swinging her arms. She was an avid supporter of WVU football and could be heard yelling “ Yippie!” from her room when WVU would score and the Dallas Cowboys was her pro team choice. She was an amazing mom, beloved grandmother, awesome great-grandmother and wonderful great-great-grandmother. Funeral Services will be held at 1:00 PM on Saturday, December 26, 2020 at Aldersgate Methodist Church in Sissonville, WV with Pastor Danny Kinder, officiating. The family will welcome friends at 11:30 AM at the church. Burial will follow at Slater Cemetery, Allens Fork, Sissonville, WV. Due to Covid-19, masks are required. The family would like to thank the hospice nurses and staff for all the care, love, and compassion they have shown. Cunningham-Parker-Johnson Funeral Home is assisting the family. Flowers are welcome or memorial contributions may be made in Cleo’s memory to Aldersgate Methodist Church or Hubbard Hospice House. Condolences may be expressed to the family at www.cpjfuneralhome.com

The family of Eunice Cleo Abbott created this Life Tributes page to make it easy to share your memories.

Eunice Cleo Abbott, 98, of Sissonville, WV, went home to be with...

Send flowers to the Abbott family.