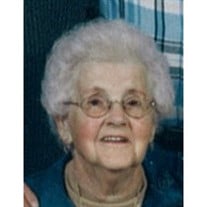 Genevia Hilda "Jackie" Holmes Shaffer, 92, of Sissonville. Born January 2, 1925, one of four children to the late Sanford and Rosie Holmes passed away July 15, 2017. Jackie was the nickname given to her by her sister Merscdiece, and was how she was known to everyone. She was a skilled seamstress, cook, baker, and homemaker, along with being the most wonderful mother, grandmother, and great-grandmother. Jackie played for many years in Pocatalico Softball League, was a previous member of the Eagles and Moose clubs, and the North Charleston Senior Center where she enjoyed ceramics classes and trips with friends. She had a gift for crocheting and sewing. She enjoyed playing cards and spending time with her family. Hardly a day went by that fresh, homemade baked goodies weren't in her kitchen, and everyone had a particular fondness for her fresh apple cake. She is survived by her loving daughter, companion and caregiver Billie Bernice Hileman of Sissonville with whom she lived and made her home for over 40 years, son Sanford Lee "Sam" and his wife Gloria of Sissonville, and dear family friend Patty Painter of Sissonville, 4 grandchildren, and 4 great-grandchildren. Preceding her in death are her husband Dewey Clifford "Duke" Shaffer, sisters Olive Thomas and Merscdiece Holmes and brother Ralph Holmes, daughter Donna Jean Shafer, son Dewey Wayne Shaffer, granddaughter Hilda Jean Shafer, and grandson Carols Eugene Shafer. Special thanks go to the staff at HospiceCare and Hubbard Hospice House West. Funeral Services will be 2:00 PM Tuesday July 18, 2017 at Cunningham-Parker-Johnson Funeral Home with Pastor Terry Yahr officiating. Burial will follow in John Beane Cemetery, Sissonville. Visitation with the family will be one hour prior to services Tuesday, also at the Funeral Home. In lieu of flowers, memorial contributions may be made to HospiceCare, 1606 Kanawha Blvd. W. Charleston, WV 25387. Cunningham-Parker-Johnson Funeral Home is serving the Shaffer Family.

Genevia Hilda "Jackie" Holmes Shaffer, 92, of Sissonville. Born January 2, 1925, one of four children to the late Sanford and Rosie Holmes passed away July 15, 2017. Jackie was the nickname given to her by her sister Merscdiece, and was how... View Obituary & Service Information

The family of Genevia "Jackie" Holmes Shaffer created this Life Tributes page to make it easy to share your memories.

Send flowers to the Shaffer family.