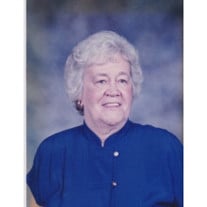 Hallie Jordan Whittington Mrs. Hallie Jordan Whittington, 89, widow of the late Collett Blackburn Whittington, Sr., died peacefully August 1, 2017 at Aiken Regional Medical Center following an extended illness. Heaven has gained the most dedicated mother ever created. She was more than wonderful and the strength of our family. Born in Charleston, West Virginia on December 3, 1927, she was the daughter of the late, David and Hattie Fisher Jordan. Mrs. Whittington had made Aiken, South Carolina her home for the last 12 years, with her daughters, Shelia Whittington and Dee Dolin, who were her main caregivers the past six years. She was a graduate of Sissonville High School and was a member of Grapevine Chapel in Sissonville, West Virginia. She retired from the West Virginia Department of Highways in 1988. She was a wonderful mother and grandmother that loved to cook and bake for her family and anyone else that may have stopped by in the neighborhood. She loved watching all sporting events on TV, especially the WVU Mountaineers, Marshall's Thundering Herd, Carolina Gamecocks and The Clemson Tigers. She was an avid reader and still at the age of 89 had a keen mind and great sense of humor. Everyone that me her loved her and she was affectionately known to most as "Nana". She loved her children and they were her main focus until her granddaughter was born and she became the "apple of her eye." She leaves behind two daughters, Shelia Whittington and Cathie Whittington Adams, both of Aiken; son Collett "Dick" Blackburn Whittington, Jr. of Aiken; brothers, and their wives, Jerry (Kitty) Jordan of Harrisburg, PA, and Larry (Kathy) Jordan of Sissonville; granddaughter, Whitney Jordan Adams of Clemson, SC; three sisters-in-law; several nieces and nephews. In addition to her parents and husband, she was predeceased by brothers, Oscar, Uhel, Jim and Jack. Funeral services will be officiated by longtime family friend, Jimmy Adkins, Friday, August 4, 2017, 2:00 PM at Cunningham-Parker-Johnson Funeral Home, Entombment will follow in Floral Hills Garden of Memories, Pocatalico. The family would like to especially thank her devoted caregivers for the loving care they provided for our mother during the six years of her illness, Tasha Gladney, Anette Pickney, Rashieka Cullum Natasha Curry and Karena Pixley. We would also like to thank her wonderful doctor Leo Muinz and his staff for their special care. And also a very special thank you to the many faithful phone friends over the years that helped make her confined life more enjoyable. She loved all of you very much!

The family of Hallie Jordan Whittington created this Life Tributes page to make it easy to share your memories.