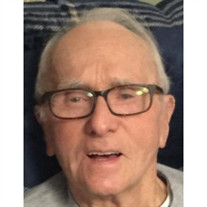 Hansel Kenneth Thaxton, 89, passed away peacefully on June 24, 2019, after a tough battle with Lewy body dementia. Hansel was a lifelong resident of Sissonville and a son of the late Othur and Gracie (Haynes) Thaxton. Hansel was an avid outdoorsman who enjoyed hunting, fishing, riding four wheelers and digging ginseng, but his greatest joy was when he accepted Jesus Christ as his Savior and was baptized, October 6, 2002. Hansel cherished singing in the church choir and praising God with his church family at Elizabeth Missionary Baptist Church, Wolf Pen. Hansel was a hard worker and an excellent provider for his family, in his early years he drove coal trucks, took a stab at running a family grocery store and did home milk deliveries for local dairies. In Hansel's later years he worked and retired from jobs within the construction industry where he was known for his blasting skills and the use of explosives as a "powderman". Hansel's many jobs included the construction of our state's Interstate System and the West Virginia Turnpike. Throughout the years, Hansel was a member of the UMWA, Teamsters, Steelworkers and Laborers' unions. In addition to his parents, Hansel was preceded in death by the love of his life, his wife of 60 years, Roxalee (Harrison) Thaxton; grandsons, Kenneth Lee Thaxton and Travis Lee Jordan; brothers, James, Frank, Donald, Darrell and Ronnie Thaxton; sister, Marie Carpenter; brother-in-law, Bobby Good and sister-n-law, Tina Fowler. Hansel will be dearly missed by his son, Rodney Kenneth Thaxton (Debbie); daughters, Joyce Ann Jordan and Sherry Lynn Breeden (Bill); sister, Janet Edens; sister-n-law, Judy Good; grandsons, Casey Jordan (Cindy), Mike Breeden, Richie Thaxton (Brandi); granddaughters, Stacey Dorrough and Lisa Thaxton; several precious great grandchildren; a host of nieces and nephews and a very special friend, Ellie Harris. Ms. Bunny Harper will oversee Hansel's service and celebration of his life on Thursday, June 27, 7pm at Cunningham - Parker - Johnson Funeral Home, visitation with family and friends will be two hours prior to the service. A private family service will be held at the New Family Thaxton Cemetery, Wolf Pen. Rodney, Joyce and Sherry offer heartfelt thanks to Cheri Taylor-Thaxton, Ellie Harris and Whitney Brown for the loving care they provided their Dad allowing him to pass in peace and with dignity. Also, special thanks to Kanawha Valley Senior Services, Central WV Aging and the wonderful, compassionate staff at Hospice. Arrangements are in the care of Cunningham - Parker - Johnson Funeral Home and the family will accept online condolences at cpjfuneralhome.com

Hansel Kenneth Thaxton, 89, passed away peacefully on June 24, 2019, after a tough battle with Lewy body dementia. Hansel was a lifelong resident of Sissonville and a son of the late Othur and Gracie (Haynes) Thaxton. Hansel was an avid outdoorsman... View Obituary & Service Information

The family of Hansel Kenneth Thaxton created this Life Tributes page to make it easy to share your memories.

Send flowers to the Thaxton family.