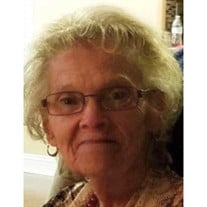 Janet Elaine Serls Whittington, age 65 born November 28, 1952 in Charleston to Patsy MacBride and Ralph Serls, gained her angel wings on December 12, 2017 after battling cancer. She fought a hard battle but God saw fit to relieve her suffering and take her home to be with Him. She leaves to mourn her loss, husband, Ronald Whittington, the man of her dreams, with whom she was married to for 48 years, daughters Rhonda Smith (Jay), Crissy Whittington (Randy), and Crystal Taylor (Chris), and the twinkle in her eyes her grandchildren Jayme, Chayce, Hunter, Logan, Lakenzi, Tenaj, Devyn, Samaiya, and Ronin. Janet worked until her retirement in 2000 as a cashier at the Foodland in Sissonville. Many may recall her friendly smile and easy going personality. She enjoyed playing bingo where she made many friends, camping, fishing, sitting near the ocean, and spending time with her grandchildren. She was a life-long member of the Jordan Light Baptist Church in Elkview. Her favorite time of the year was at Christmas, and she has received the greatest gift of all-a new home in heaven. A memorial service celebrating the life of Janet will be held on Saturday, December 16th, 1:00 p.m.at Guthrie Missionary Baptist Church, with Pastor Melvin Sizemore officiating. The family will accept online condolences at: cpjfuneralhome.com Cunningham-Parker-Johnson Funeral Home is serving the Whittington Family.

The family of Janet Elaine Whittington created this Life Tributes page to make it easy to share your memories.