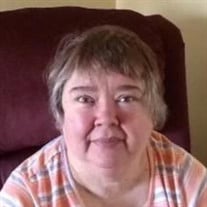 Janis Lorena Anderson, of Charleston, passed away at home on January 6, 2021 in the early afternoon, nine days short of her 74th birthday (January 15, 1947). Janis died from long-standing health problems, which did not dampen her amiable spirt and sanguine outlook on life. She was preceded in death by her father, Watson Anderson; mother, Dora Gwinn Anderson, and sister, Wilma Dean Anderson. Born and reared on a farm in Summers County, WV, she graduated from Sandstone High School in 1966. Shortly thereafter, she and her family moved to Charleston where she attended cosmetology and business college. During her working years, she was employed by several area businesses. Left behind and nearest of kin are her first cousins that loved her dearly: June Vance Groves of Cottageville, WV; John (Marlene) Vance of Lockbridge, WV; Mynda (Walter) Lorenz of Middleville, MI; Roger Vance, caregiver, recently deceased (widow, Janet) of Charleston, WV; Stan (Megan) Gwinn of Newark, DE; Bob (Kathy) Gwinn of Dayton, OH; and Monroe (Mary) Gwinn of Scottsdale, AZ, along with many nieces, nephews, and friends. The family wishes to specially thank Iris Adkins for befriending Janis and for looking after her in recent years. Under the tutelage of her mother, Janis committed her life to Christ at an early age. She was a woman of great generosity who now rests from her labors (Rev. 14:13). Her hope was in the Lord, and in the promise that to be absent from the body is to be present with the Lord (II Cor. 5:8). A graveside committal and service of remembrance will be held in the coming spring on the Gwinn family farm in Summers County, WV. Cunningham-Parker-Johnson Funeral Home is assisting the family with cremation arrangements. Condolences may be expressed to the family at www.cpjfuneralhome.com

Janis Lorena Anderson, of Charleston, passed away at home on January 6, 2021 in the early afternoon, nine days short of her 74th birthday (January 15, 1947). Janis died from long-standing health problems, which did not dampen her amiable spirt... View Obituary & Service Information

The family of Janis Lorena Anderson created this Life Tributes page to make it easy to share your memories.

Janis Lorena Anderson, of Charleston, passed away at home on...

Send flowers to the Anderson family.