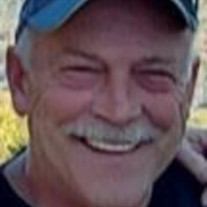 Jimmie Whittington, 65, of Sissonville, WV, passed on July 1st, 2021 after a short battle with cancer. Jimmie was born on October 24, 1955 to Milford and Christine Whittington. He attended school in Sissonville throughout his childhood until he briefly moved to Titusville, FL where he graduated from Astronaut High School. He returned to West Virginia after high school, living with the parents of close friends while he began his life back home. Shelby Gene and Delta Murray became another set of parents to Jimmie while he lived with them. The friendships Jimmie made during this time with John Murray, Eric Murray, and David Moss lasted throughout his life and they also became his family. Jimmie began dating the love of his life, Anita Abbott, in 1980, and after a brief time, realized that he had found the other half of himself. He and Anita married in October 1981 and in 1983 they had their only child, Addam. Jimmie worked tirelessly to build a life for his family and was a wonderful husband, father, and grandfather. Jimmie was thoughtful, caring, quick witted, and funny. He always let people know how much they meant to him, whether that was through loving words with a hug, by cracking jokes, or by giving his time. Jimmie helped many people throughout his life, including neighbors, family, and friends. Many weekends were spent helping others build their lives by remodeling rooms, building additions, porches, bridges, garages, and by fixing or replacing any number of things that had broken. He also spent many weekends working on his own home, where friends would return the favor by helping him. Jimmie was a true handyman who took pride in his work, his ability to help others, and enjoyed the time he spent working on projects with his friends and son. In his truly-free time, Jimmie enjoyed spending time with his wife, son, grandchildren, and friends. He and Anita spent most of their time together and enjoyed taking long drives in the country, relaxing by the river or at the beach, taking their dog Jacie on walks or to the river to swim, slow dancing to Journey, and swinging on their back patio, taking in the peace and quiet while watching wildlife. When he was with his son and grandchildren, Jimmie loved sharing his sense of humor and when the children weren’t paying attention in the pool, enjoyed surprising them with a cannonball splash on more than a few occasions. He also enjoyed playing cards and horseshoes, going hunting, and spending time talking and reminiscing with his friends. Jimmie also had a passion for woodworking and fishing. Over the years, he built many things for family and friends that they still use and have to cherish for many years to come. When he wasn’t in his workshop, he loved to go wading in rivers to fish with his wife, son, or friends. Many, many fish were caught over the years and many laughs were shared along with many stories about slips, falls, bad casts, near-catches, and of course who caught the most fish that day. Jimmie also enjoyed fishing the inter-coastal waterway or from the beach when he visited his brother Jeff and his parents in Florida. Whether he caught anything or not, he truly enjoyed being in or near the water with the people he loved. Jimmie is preceded in death by his parents Milford and Christine Whittington, brother Atlee Whittington, father and mother-in-law Richard and Cleo Abbott, second parents Shelby Gene and Delta Murray, and special brother Gene Murray. The list of people whose lives he touched and who are left to keep his memory alive is long and include his loving wife of 39 years, Anita Whittington of Sissonville; adoring son, Addam (Heather) Whittington; grandchildren, Alyssa, Kaylee, and Brent of Hurricane; sister, Pamela (Herb) Taylor of Sissonville; brothers, Ronnie Whittington of Sissonville and Jeff (Terry) of Titusville, FL; special brothers, David (Patricia) Moss, Eric (Pamela) Murray, and John Murray all of Sissonville; special sister, Regina Murray of Charleston, and a number of other family members, friends, and close neighbors. Jimmie loved the people in his life, loved to laugh, loved to make people laugh, and will truly be missed by those that knew him. Funeral services will be held at 6:00 P.M. on Thursday, July 8, 2021 at Cunningham Parker & Johnson Funeral Home with Pastor Raymond Jordan, officiating. Visitation will be held one hour prior to services.

Jimmie Whittington, 65, of Sissonville, WV, passed on July 1st, 2021 after a short battle with cancer. Jimmie was born on October 24, 1955 to Milford and Christine Whittington. He attended school in Sissonville throughout his childhood until... View Obituary & Service Information

The family of Jimmie Whittington created this Life Tributes page to make it easy to share your memories.