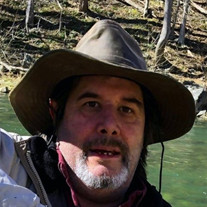 Kevin W. Ford passed away peacefully in his sleep on Monday, March 7th, 2022. Kevin was born September 12, 1962, in Charleston, West Virginia to Mildred Bledsoe (Koontz) and Donald Ford. Kevin graduated from George Washington High School in 1981 and spent his years after graduation following his passions for people and creativity. Kevin, a constant idea generator, led several business ventures, including a wildly successful online shirt shop catering to Mountaineer fans all over the world. His love for the Mountaineers guided his passions throughout his life. Kevin loved fishing, mountain biking, skateboarding, and snowboarding. Until the very end, he would dream about fishing in the Canaan valley or mountain biking through the woods of North Carolina. Kevin's first grandson was born in 2011 and he had known no greater love. Since then, he has been the proud grandfather of three more boys. He loved seeing pictures of them growing up and his annual visits with them each Summer. Kevin is survived by his mother, Mildred, stepfather Ted, sister Denise and her husband Ken, brother Tim and his wife Denise, daughter Jennifer, daughter Jessica and her husband Aaron, and his four beautiful grandsons, Brandon, Casey, Graham, and Landon. Kevin will be joining his beloved brother, Donald in heaven. A private family service will be held at 4pm Monday, March 14th, 2022, at Morris Memorial United Methodist Church in Kanawha City, Charleston, West Virginia. The family is requesting that, in leu of flowers, donations be made in Kevin's name to the Kanawha Charleston Humane Association, 1248 Greenbrier Street, Charleston, WV 25311, in honor of his love of dogs. The family will accept online condolences at: cpjfuneralhome.com Cunningham-Parker-Johnson Funeral Home is serving the Ford Family.

The family of Kevin Ford created this Life Tributes page to make it easy to share your memories.

Kevin W. Ford passed away peacefully in his sleep on Monday,...

Send flowers to the Ford family.