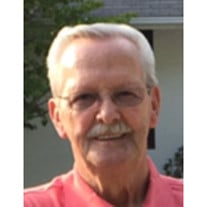 Larry Eugene Baldwin, 74, of Sissonville, died Wednesday, August 2, 2017 in CAMC Memorial Hospital after an extended illness. He was a member of Grapevine PAC Church, where he served as Elder, Sunday School Superintendent and Trustee. Larry was employed at True Temper Corporation for 16 years, and retired from the Clay Center for the Arts and Sunrise Art Museum with 32 years of service. Larry was preceded in death by his parents, Wilbur and Alpha Legg Baldwin; stepmom, Ruby Fisher Boggess; brother, Edgar Baldwin; and sister, Minnie Lou Baldwin. He is survived by his loving wife of 51 ½ years, Karen Wines Baldwin; adoring daughter, Jeana Nicole Baldwin Higginbotham and son-in-law, Rodney (whom he thought of as a son); a host of nieces and nephews, family and friends and two special great nieces who loved and brightened his day, Addison and Elin Griffith. Special thanks to the nurses at the Cancer Center and 4 South at Memorial Division for their wonderful care. We would also like to give a special thanks to Barbara Hilton for how she touched Larry's life while he was a patient at Memorial. Funeral service will be 2 PM, Sunday, August 6, at Cunningham-Parker-Johnson Funeral Home, with the Rev. Roger Hammons officiating. Burial will follow in Sissonville Memorial Gardens. Pallbearers are Monte Tate, Darren Wines, Travis Fisher, Casey Boggess, Donnie Griffith, Donny Wehrle, Dave Dangerfield and Steve Godbey. Visitation with the family will be from 5 to 8 PM, Saturday, August 5, also at the funeral home. Online condolences can be sent to the family at cpjfuneralhome.com Cunningham-Parker-Johnson Funeral Home is serving the Baldwin family.

Larry Eugene Baldwin, 74, of Sissonville, died Wednesday, August 2, 2017 in CAMC Memorial Hospital after an extended illness. He was a member of Grapevine PAC Church, where he served as Elder, Sunday School Superintendent and Trustee. Larry... View Obituary & Service Information

The family of Larry Eugene Baldwin created this Life Tributes page to make it easy to share your memories.

Send flowers to the Baldwin family.