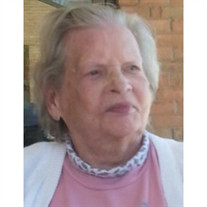 Lena Carpenter McKemy Lena Carpenter McKemy, 99, of Charleston, passed away September 19, 2017. Lena was raised in Putnam County, served our country as one of the "Rosie The Riveter" ladies, during WWII in Akron, Ohio. She put herself through... View Obituary & Service Information

The family of Lena Carpenter McKemy created this Life Tributes page to make it easy to share your memories.

Send flowers to the McKemy family.