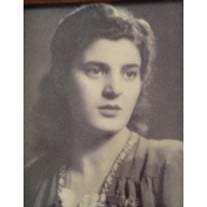 MALAKEE (HUSSON) ABODEELY, 96, of San Francisco, California and previously Charleston, W.Va., passed away on Saturday, September 14, 2019, at her home in San Francisco after a long illness. She was the 13th child born to Very Rev Fr. George and Kh. Ghantousse Husson of Aita al-Foukhar, Lebanon. Her father was an Orthodox priest. Malakee came to the United States in 1946 and after a brief period in California, settled in Charleston for a number of years with her brothers and sisters, all of whom are now deceased. She later moved to Northern California to be with her two sons. Malakee took on the tough task of raising two sons on her own, often by working long hours six days a week as a seamstress and dressmaker. She did so without having any formal education and with English as her second language. Her entire life was devoted to her two sons, one of whom (Arthur), passed away at the age of 37 from multiple sclerosis. Her greatest joy in life was her family, all of whom loved her dearly. She was the best mother a child could ask for; an incredible cook; had a great sense of humor and was devoted to God her entire life. Malakee is survived by her son George, her grandchildren Andrew, Alissa, Stella and Grace, her great-grandchildren Danny and Riley, and numerous god children.. Services and visitation will be held at St. George Orthodox Cathedral, Chas., WV. Friends and family may call from 6 PM - 8 PM with Trisagion prayers being held at 7:30 on Friday, Sept. 20. Funeral services will be held on Sat. September 21st at 11 AM officiated by Rev. Fr. Joseph Hazar. Interment will follow at Sunset Memorial Park in So. Chas, WV. Cunningham Funeral Home Chas, WV are in charge of arrangements. In lieu of flowers, donations may be made to St. George Orthodox Cathedral, Chas. WV. The family will accept online condolences at: cpjfuneralhome.com Cunningham-Parker-Johnson Funeral Home is serving the Abodeely Family.

MALAKEE (HUSSON) ABODEELY, 96, of San Francisco, California and previously Charleston, W.Va., passed away on Saturday, September 14, 2019, at her home in San Francisco after a long illness. She was the 13th child born to Very Rev Fr. George... View Obituary & Service Information

The family of Malakee (Husson) Abodeely created this Life Tributes page to make it easy to share your memories.

Send flowers to the Abodeely family.