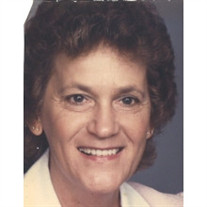 Oneda M. Legg, 87, of Sissonville went home to be with the Lord January 24, 2018. She was born May 19, 1930 to the late Frank and Ocie Clendenin. She was a retired cook from The State Police Academy, was a Christian and enjoyed spending time with her family. Also preceding her in death were her husband, Elmer "Bob" Legg; daughter, Pansy Casto; grandsons, Ray and Matthew Casto; brother, Harold Clendenin; sisters, Lue Ann Sigman and Velma Fisher and a niece Donna Good that she raised. Left to cherish her memory are sons, Mike Legg and wife Sandy of Liberty and Dale Legg and wife Deloris of Charleston. Grandchildren, Tammy Duff and husband Gary of Kenna, Michael Legg and wife Heidi of Liberty, Morgan Legg and wife Rhonda of Charleston, Sherry Walker of Charleston and Sheila Wilson and husband Keith of Cross Lanes, Randy Carl Shamblin and wife Amy of Kenna and Michelle Mayhue and husband Steve of Leon. Great Grandchildren, Misty Rhodes and husband James of Kenna and Corey Duff of Kenna, Nathan Walker of Charleston, Lindsay Walker of Charleston, Adam Wilson of Sissonville, Kaitlin Wilson of Cross Lanes, Kaiden Legg of Liberty and Bentley Legg of Charleston, Zachary and Savanaha Mayhue of Leon and Haylee Shamblin of Kenna. Great Great Grandchildren, Wyatt Wilson of Sissonville, Chloe Walker and Levi Walker of Charleston; brother, Buster Clendenin of Kentucky; sister, Katheryn Miller of Charleston, Wilma Joslin of Dunbar, Betty Layton of North Carolina and a nephew Larry Sigman, that she raised. Funeral Services will be 1:00 PM Saturday January 27, 2018 at Cunningham-Parker-Johnson Funeral Home with Pastor Raymond Jordan officiating. Visitation with the family will be one hour prior to services also on Saturday. Entombment will follow in Floral Hills Garden of Memories, Pocatalico. The family wishes to express sincere thanks for the compassion and excellent care provided for their mother at Meadow Brook Nursing Home, Charleston. The family will accept online condolences at: cpjfuneralhome.com Cunningham-Parker-Johnson Funeral Home is serving the Legg Family.

Oneda M. Legg, 87, of Sissonville went home to be with the Lord January 24, 2018. She was born May 19, 1930 to the late Frank and Ocie Clendenin. She was a retired cook from The State Police Academy, was a Christian and enjoyed spending time... View Obituary & Service Information

The family of Oneda M. Legg created this Life Tributes page to make it easy to share your memories.

Send flowers to the Legg family.