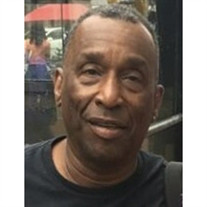 Terry Wayne Berkley, affectionately referred to as "T. Wayne" by family and friends, departed this life on July 27, 2018, while vacationing in Oak Bluffs, MA. Terry Wayne was born to the late, Terry Alzena and Della Barksdale Berkley. He was preceded by a special aunt, Oretha Pleasant ans a special godmother, Della Brown Taylor. Terry Wayne was born in Charleston, West Virginia on September 11, 1956. He attended school in Kanawha County and graduated from Charleston High School in 1974. While in Boston he was employed as a broadcast engineer with WHDH-TV News Channel 7, Boston, Massachusetts for over seventeen years, until his passing. Those who knew Terry Wayne can attest to his compassionate and generous spirit. He was a mentor, an advisor, and a friend to many people from all walks of life. Terry was the definition of "love." White "T Wayne" will be missed by many, those who knew him valued his friendship and his steadfast commitment to all he encountered. Terry Wayne love life, his family and his friends -- and they loved his back. preceded in death by his parents, ( Alzena and Della B.), Terry Wayne is survived by his daughter: Terri Ane' and a host of cousins and friends. Terry's Life Celebration will begin on August 5, 2018 at Dana Park in Cambridge, MA at noon with a balloon release. Terry's memorial service will be held in Charleston, WV on August 11, 2018 at First Baptist Church, Charleston, WV. Visitation will be at 4:30 pm and the service will begin at 5:00 pm, followed by a dinner for all friends and family at McGhee Suites on the campus of WV State University. Services will culminate on September 11, 2018, at Springhill Cemetery, in Charleston, WV. Friends may offer condolences at cpjfuneralhome.com.

Terry Wayne Berkley, affectionately referred to as "T. Wayne" by family and friends, departed this life on July 27, 2018, while vacationing in Oak Bluffs, MA. Terry Wayne was born to the late, Terry Alzena and Della Barksdale Berkley. He was... View Obituary & Service Information

The family of Terry Wayne Berkley created this Life Tributes page to make it easy to share your memories.

Send flowers to the Berkley family.