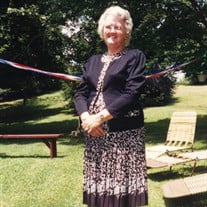 The family of Thelma Emogene Shaffer Newhouse Hall remembers her on the 1st anniversary of her passing. Thelma Emogene Shaffer Newhouse Hall, born April 8, 1935 in Kanawha County, passed away on July 30, 2020 in Glasgow, WV. She was the daughter of the late George W. Shaffer and Victoria Ann Truman. She married John G. Newhouse in 1952 and had four sons, Cecil Ray, David Lee, John Edward and Larry Dale Newhouse. In addition to her parents, she was preceded in death by her brothers, Archie, Guy Wesley, Dorsel, George Wilbur, Roy Albert, Darrell and Holly Ray Shaffer and her sisters, Gail Shaffer Archibald Dillard, Hallie B. Myers, Nellie Range and Dollie Fay Baldwin Chapman, and an infant sister who passed in 1913. Those left to cherish her memory include her sons, Cecil Ray and David Lee Newhouse; her husband, Alvin C. Hall who passed shortly after Thelma in September of 2020, and several grandchildren, nieces and nephews. She was laid to rest at the John Beane Cemetery in Sissonville. Cunningham Parker & Johnson Funeral Home served the family.

The family of Thelma Emogene Shaffer Newhouse Hall created this Life Tributes page to make it easy to share your memories.