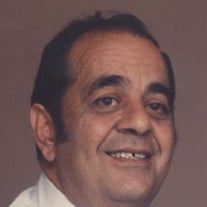 Theodore "Ted" Isaac Abdalla, 89, of Charleston, WV passed away from a long illness on Sunday, November 28, 2021. He was born June 11, 1932, to the late Isaac and Najla Abdalla, née Sakhat, and is preceded in death by his brother, Herbert Abdalla, sister, Simone Husson, brother in laws Nick Husson, Sr, Clarence "Jamie" Jamison and sister in law Leah Abdalla. He is survived by his brother, John Abdalla (Jane), and sister Yvonne Jamison. Living to carry on his memory are his children; Suzzanne Ryan (Patrick), Theodore "Teddy" Abdalla Jr., Tammy Epperly (Stephan), Elaine Abdalla, and five grandchildren; Ryan Taggart, Jonathan and Andrew Abdalla, Cooper and Christian Epperly, and three great-grandchildren. Ted was a 1950 graduate of Charleston High School and was self-taught in plumbing, carpentry, masonry, and electrical work. These trades allowed him to provide a life-long living for himself and his family. He was known around Charleston for his plumbing business, Abdalla's Plumbing, which he took great pride in. He went on to own several rental properties in the area and stayed hard at work maintaining them up until the age of 82 when an accident left him unable to work. Ted had a love for gardening that was passed on from his late parents as well as his love for cooking and baking. He enjoyed planting a garden each year, his backyard full of tomatoes, corn, peppers, and his beloved fig tree. His front yard would be filled with beautiful flowers, roses being his favorite. He still enjoyed this hobby with the help of family up until his passing. His family was, above all else, the most important thing to Ted. The love and devotion he had for his parents shined as he faithfully tended to them in their last years. Living in the house next door, there was hardly a day he missed spending time and having dinner with them. This devotion continued as a father to his daughters, Tammy and Elaine. Although he worked a lot, he always made time for his girls and was there each day to prepare a home-cooked meal. He was a very proud and loving father who bragged about his family every chance he could get. He spent the last seven years of his life in the home of his loving ex-wife and friend of 42 years, Mary Case, who made sure he was loved and taken care of daily. He enjoyed riding up and down the streets of Kanawha City in his wheelchair, visiting old friends and neighbors. The biggest joy for him in his last years was seeing family and spending time with his grandsons. A viewing will be held Thursday, December 2, 2021 at St. George Orthodox Cathedral from 6-8PM, with Trisagion Prayers at 7:30PM. Funeral services will be held Friday, December 3, 2021, 11AM at St. George Orthodox Cathedral with Father Joseph Hazar officiating. Burial to follow at Sunset Memorial Park in South Charleston. Flowers may be sent to St. George Orthodox Cathedral at 190 Court Street, Charleston, WV 25301. The family respectfully requests that anyone attending the visitation and services, please wear a mask or some sort of face covering. Condolences can be sent to Tammy Epperly at 3808 Virginia Ave SE, Charleston, WV 25304 or by visiting cpjfuneralhome.com. Donations in his honor can be sent to St. George Orthodox Cathedral. Cunningham-Parker-Johnson Funeral Home, Charleston is serving the Abdalla family.

Theodore "Ted" Isaac Abdalla, 89, of Charleston, WV passed away from a long illness on Sunday, November 28, 2021. He was born June 11, 1932, to the late Isaac and Najla Abdalla, née Sakhat, and is preceded in death by his brother, Herbert Abdalla,... View Obituary & Service Information

The family of Theodore Isaac Abdalla created this Life Tributes page to make it easy to share your memories.

Send flowers to the Abdalla family.