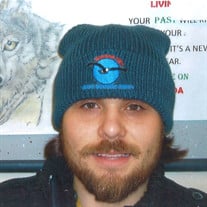 Thomas D. Johnson, 31, of Glen Ferris, WV, passed away on January 29, 2021 with his Combat Veteran's Battle Buddy, Remington, by his side, not wanting to leave a man behind. Trey was born on June 14, 1989 in Charleston, WV. He was preceded in death by his grandparents, Richard and Carolyn Sue Wilkinson, and William R. Johnson and Elizabeth Dudley Johnson. Trey is survived by his parents, Redhonda (Brandon Seward) Wilkinson of Glen Ferris, WV and Thomas D. (Missy) Johnson of Hurricane; brother, Christian Andrew "Drew" (Katie) F. Johnson and Michael (Crystal) Grass; aunt, Rhonda (Keith) Wilkinson of Sissonville; uncles, Richy (Julie) Wilkinson of Indianland, SC, Shane Wilkinson of Sissonville, Randy (Nancy) Johnson of Chesapeake, VA and John Johnson of San Diego, CA. He was also able to meet his only niece, Elise, who was born on December 26, 2020. Trey is also survived by his honorary daughter, Saylor Nutter, as well as many cousins. Trey joined the Army in 2007 and studied to become a Meteorologist. Trey was stationed in Hawaii while training for Iraq, and he received many specialty coins for outstanding performance during maneuvers in California. He was a combat veteran who served in Tikrit, Iraq. While serving in Iraq, he was awarded Soldier of the Quarter. After his discharge from the military, he attended Marshall University where he joined the Kappa Alpha Order fraternity. He also attended the University of Charleston and WVU. Trey loved watching WVU football and being outdoors, whether shooting guns, riding his dirt bike, or being with his dog. He loved his family and will be greatly missed. Due to Covid-19 restrictions, funeral services will be held privately for the family at Cunningham-Parker and Johnson Funeral Home in Charleston. Burial will follow at Donel C. Kinnard Memorial State Veteran's Cemetery in Dunbar, WV, where many proud men and women rest that served our country. In lieu of flowers, memorial contributions may be made in Trey's honor to the Wounded Warrior Project or to VA sponsored programs. Condolences may be expressed to the family at www.cpjfuneralhome.com

Thomas D. Johnson, 31, of Glen Ferris, WV, passed away on January 29, 2021 with his Combat Veteran's Battle Buddy, Remington, by his side, not wanting to leave a man behind. Trey was born on June 14, 1989 in Charleston, WV. He was preceded in... View Obituary & Service Information

The family of Thomas Johnson created this Life Tributes page to make it easy to share your memories.

Send flowers to the Johnson family.